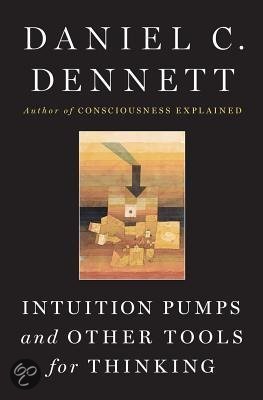 I am reading Daniel Dennett’s new book “Intuition Pumps and Other Tools for Thinking“. I think the main question in all of his writing, is: what is the “I” that is reading and how is it doing that and other things I’s usually do?

Reading is one of the most complex and problematic processes the I can be involved in. An excellent possibility to see what his answer is. Of course that’s only my interpretation of it.

The fundamentals of Dennett’s philosophical universe are:

The reading of any book involves the digesting of (1) visual stimuli (black dots) into letter combinations, (2) letter combinations into words, (3) words into sentences, (4) sentences into some chain of “meaningful events”. Under normal conditions, the I is only involved in the last activity: making sense. The rest are automatic processes mostly out of control once begun. Only when black dots make no known letter combinations, words are unknown or sentences make no sense on their own the I is called into direct action on this lower level to resolve the problem. Those automatic processes are not given by nature but the result of schooling the individual. They are socially and historically developed (evolution!) practices which have to be learned and trained. As a matter of fact the quality of the education of each of these practices is vital for your ability to read. The first one is pretty basic, but each further step requires more training. The more words you have learned, the more automatic your reading phase(2/3) will be. The making of sense (4) however is nearly impossible to automate, although this has to be trained too. Note that especially when training to make sense the I that trains is developing itself. It grows more mature, being able to understand more.

Of course when you read a detective or romantic story as a diversion it can be pretty automatic, but on the other side you will be none the wiser after reading. If you want to learn something from a text you will have to make a conscious effort, involving the I. The simplest form of learning is the learning of “facts”. When you look up the title of a song or the name of a town you just have to memorize what you read. Some people with a photographic memory seem to accomplish this pretty automatic too. For more complex notions, for instance Dennett’s theory of consciousness another type of reading is necessary.

There are two ways of reading. The first one is what I call critical reading. It tries to make sense out of the text as a whole, not just individual phrases or even paragraphs or chapters. Essential is that the I first tries to discover the internal consistency or inconsistency of the text. The question is if the text makes sense on its own, regardless of the sense the I reads in it. When the author uses the word “illusion” you postpone your verdict on what he means by that until you have read the rest or the relevant rest of the text. In the meantime you may “sorta” fill it with the meaning you held when you started reading. (sorta= “sort of”, as defined discussing “folk psychology” in the book.) But the I has to flag it, and all other important terms, as fluid in its memory, being ready to alter the meaning when the text demands it. This does not mean that it has to change its own interpretation yet. You flag it as illusion(Dennett) . While reading the text the I checks its internal consistency. Too many inconsistencies will make it put the book aside or even throw it away. Only when it sorta has the whole picture, without too many inconsistencies it can start comparing the exposed ideas with “its own” ideas on the subject and eventually choose to amend one with another to a whole.

When trying to describe the above process in more detail one could say that one keeps  what is written as interrelated notions or little sentences spinning around in the brain. Contending together or in opposition against each other or against notions already “there” for dominance i.e. “truth”. Coming to a final statement on the text read: will it be incorporated in part or as a whole in your belief-system. If yes, it has allowed the text criticize it: The I has changed its opinion and transformed itself. If no, it can criticize the text. In both cases it can decide if it thinks it’s worthwhile to share its findings with others  or even the author. It will be clear that in order to be able to be critical on the text the I has to be able to be critical on itself too. This is why I call this critical reading. Maybe you can call it a critical stance, a special case of intentional stance.

It is this process that Dennett called “fame in the brain” when he is writing on consciousness. There are phrases or other meaningful actions spinning around that are candidate reactions to the stimulus the I is supposed to respond to, for instance some text another I speaks to it or some (social) situation that calls for (re)action. One of those is selected to be acted out. The sum of the selected phrases forms the story of itself, the I. As with every story the I at all times tries to keep the story consistent and the experience of the self continuous. This is an important factor for which phrase or action is selected in a certain situation. As is the factor of its knowledge of the social situation, the intention of the other(s). It even can lead to automatic exchanges where little or no consciousness is displayed: “How are you doing?” “Fine”. But in any case the selection process is autonomous and “unknown”. There is no overreaching consciousness which does the selection. Of course in hindsight it can find motifs or reasons why one action or phrase is selected and the other is not.

There is a second kind of reading I would call prejudicial reading. In this the meaning of words and even phrases is taken the same as the meaning the I has already assigned to it from past experience before it read them in this new context. So if the I has somehow learned to think that an “illusion” is something that, among others, has the quality of “not existing” if it reads the phrase “Consciousness is an illusion” it directly draws the conclusion the author of the phrase is saying consciousness does not exist. Of course it balks at this conclusion. This way a text is read for agreeing. As soon as a dissonant occurs it is broken. The reading stops or continues in a distorted way. The only way this reading could lead to better understanding is the use of a lot of new or unknown words. This is not really a solution, because in order to explain the meaning of the new words one still has to use the old ones.

There even is a third kind of reading called “symptomatic reading”. Up till now we have assumed that the text is a perfect expression of the intentions of the author. But this doesn’t have to be the case. Symptomatic reading involves a reading that tries to find out what the author “really wanted to say”. This is a very tricky business, not relevant here.