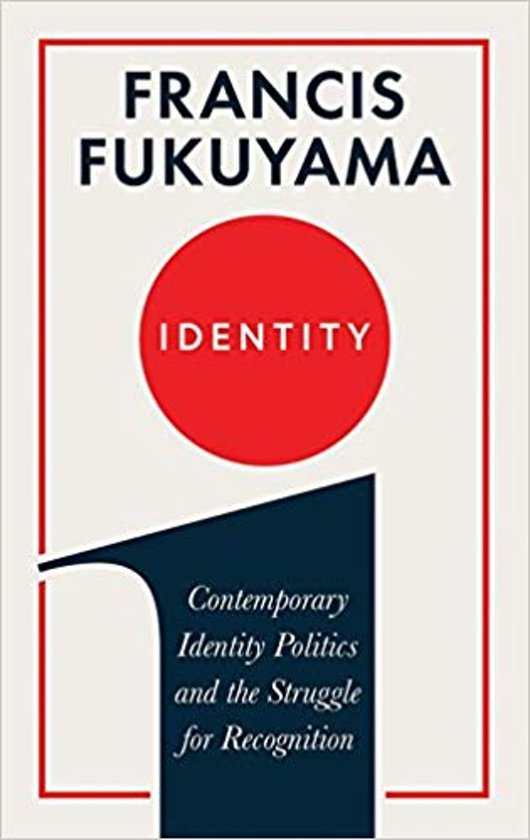 After his monumental two volume opus on “Political Order” the theme of “Identity” is a surprise though not a pleasant one. In the introduction Fukuyama ascribes his book to the fact that Trump was elected president and his dislike of this fact is clearly visible in his writing. Not very scientific, although he tries and sometimes succeeds in taking a Neutral Point of View (Wikipedia’s NPOV). In fact one tastes contempt for any “populist opposition” in the USA and EU. In his final chapter “What is to be done”, Fukuyama — not disclosing the fact that this title refers to Lenin’s famous pamphlet — pleads for an overarching nationalism based on “creedal” identity. But this nationalism is so “inclusive” and abstract that it will not appeal to many.

Fukuyama starts with a passable analyses of the roots of present-day identity. At the centre is “thymos” in its diverse forms, but mainly characterized as the necessity for recognition of one’s worth for the group.

We cannot get away from identity or identity politics. Identity is the “powerful moral idea that has come down to us,” in Charles Taylor’s phrase, and it has crossed borders and cultures since it builds on the universal human psychology of thymos. This moral idea tells us that we have authentic inner selves that are not being recognized and suggests that the whole of external society may be false and repressive. It focuses our natural demand for recognition of our dignity and gives us a language for expressing the resentments that arise when such recognition is not forthcoming.

Correctly he poses the problem what happens when this group is enlarged to a modern society. He shows how the supposed existence and following search for and expression of the “authentic self”, somehow suppressed by the rules of society, leads to identity-politics. That “society” itself is generating this kind of strivings in individuals, that this a kind of policy to keep people atomized and divided seems to pass him by.

The disastrous impact of identity politics on science and reason is well illustrated:

This can be illustrated by the controversy that broke out in 1987 over Stanford University’s Western Culture core course. That year civil rights leader the Reverend Jesse Jackson led a group of Stanford students in chanting, “Hey, hey, ho, ho, Western Culture’s got to go.
…
The therapeutic motive underlying demands for changes in the curriculum was evident in the testimony given by Bill King, president of Stanford’s Black Student Union, in the original debate over Western Culture: I know Professors are simply preserving that tradition which they consider correct . . . But by focusing these ideas on all of us they are crushing the psyche of those others to whom Locke, Hume, and Plato are not speaking, and they are denying the freshmen and women a chance to broaden their perspective to accept both Hume and Imhotep, Machiavelli and Al Malgili, Rousseau and Mary Wollstonecraft . . . The Western culture program as it is presently structured around a core list and an outdated philosophy of the West being Greece, Europe, and Euro-America is wrong, and worse, it hurts people mentally and emotionally in ways that are not even recognized.

What is revealing about King’s statement is that his justification for the curricular shift is entirely psychological: the current canon is “crushing the psyche” of minority and female students, and hurting people “mentally and emotionally in ways that are not even recognized.”

Fukuyama formulates the following solution (What’s to be Done):

How do we translate these abstract ideas into concrete policies at the current moment? We can start by trying to counter the specific abuses that have driven assertions of identity, such as unwarranted police violence against minorities or sexual assault and sexual harrassment in workplaces, schools, and other institutions. No critique of identity politics should imply that these are not real and urgent problems that need concrete solutions.

Beyond that, there is a larger agenda of integrating smaller groups into larger wholes on which trust and citizenship can be based. We need to promote creedal (bases on a credo, a statement of belief) national identities built around the foundational ideas of modern liberal democracy, and use public policies to deliberately assimilate newcomers to those identities. Liberal democracy has its own culture, which must be held in higher esteem than cultures rejecting democracy’s values.

It is significant that the abuses he sums up are leftist and to a large extent false claims that are the consequence of identity politics and not its source. (A good read on this issue is Tom Wolfe’s 1970 Radical Chic & Mau-Mauing the Flak Catchers) On the other hand, what he perceives as identity politics of the right, the “populist” and “nationalist” identities, is apparently not “real” or “urgent”. The deplorables are left out.

The solution he suggests is simply impossible. Democracy doesn’t have a “own culture”. Democracy is there to facilitate, within limits, the living together of different cultures. “Liberal” doesn’t make it better at all. In the first place it is more a political and economic concept then a worldview, and it is not inclusive for social democrats, conservatives and others.

I started writing this critique mid September 2018 but finished it just now. A bit late unfortunately.